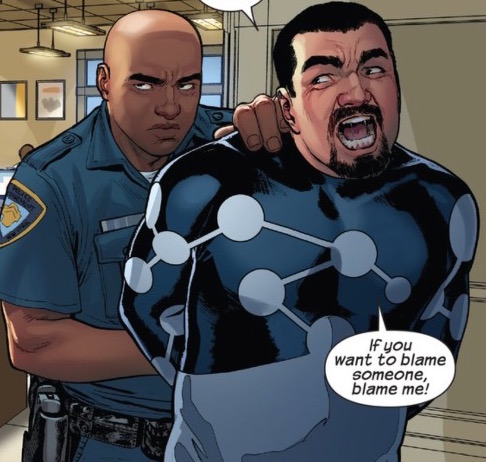 I first discovered Spider-Man through the PBS television series The Electric Company, during a segment which helped younger viewers learn how to read. How great is this?

With great power comes great literacy, and it wasn’t long before I found my way to the actual comic book series and became a fan.

Spider-Man became my favorite comic book hero for a lot of reasons. My parents moved to the US from India in the 1970s and I was the first in my family to be born as an American. It was an interesting and often challenging experience growing up and straddling two worlds. I was on my own figuring out this dual identity – trying to fit in both at school and at home, with neither “world” quite understanding the other. It was a lot of pressure and often lonely, so I connected with the character of Peter Parker. Pete was also on his own, trying to balance two lives and somehow make both of them work. He was also a good kid, doing his best to do right by others. He didn’t seem particularly depressed about having so many responsibilities (fighting crime as Spider-Man while working hard at school and watching out for his Aunt May), but it’s not like he particularly enjoyed it either. He just got on with it because that’s what the good guys do. You do the right thing (even when it’s tough) because you can and should, and not for credit or glory. I admired and aspired to that.

Spider-Man is driven to be responsible but there’s a key difference from how he acts as Peter Parker: He’s having fun! The banter, the sarcastic extrovert attitude  – all of it was this great outlet and counterpoint to the otherwise quiet and serious life he’d led. That kind of confidence wasn’t always easy to emulate, but it was certainly inspiring all the same.

As the seemingly lone minority kid in my classes and group of friends, I was very aware of looking different from everyone else. That also tied into my affinity for the character, because he could be anybody under that mask, while the other heroes’ costumes made it very clear that they were not minorities. Growing up, I was often aware of how people formed initial opinions about me based solely on my appearance (before I’d even said a word) – sometimes okay, sometimes not so much. Spider-Man removed that from the equation and in the process, allowed his true self to shine through. It was only natural for a kid like me to gravitate toward a superhero like that, even though I wasn’t about to put on tights…

Now I’m a dad to two boys, still kicking around thoughts about identity. I’d seen this 2013 New York Times parenting blog about those same ideas, calling attention to Miles Morales as Spider-Man. Wait, Miles Who? I vaguely remembered him making the news a while back when he’d made his debut, but didn’t pay much attention at the time and hadn’t realized that he was still around. I now wanted to learn more about this new version of a character that I’d enjoyed so much as a kid (and one that my own kids were now discovering and enjoying for themselves). And so, I picked up a new comic book for the first time in years: Ultimate Comics All-New Spider-Man #1. 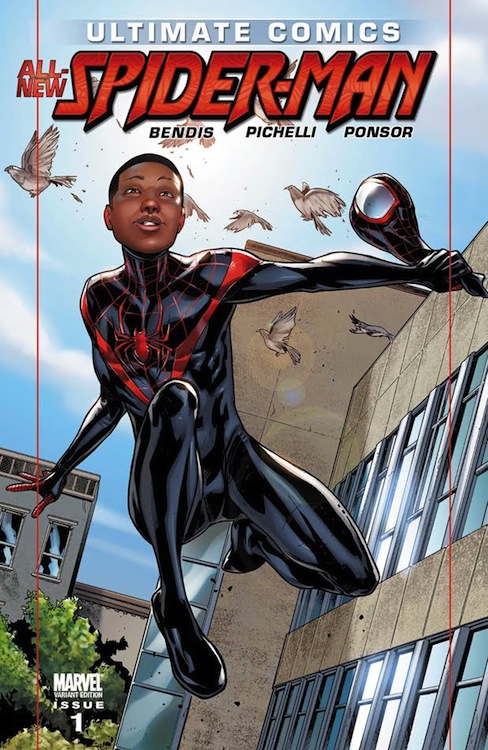 “Wow” doesn’t even begin to cover it. I was immediately taken by the stunning art, vivid colors, and the time spent on developing characterization. Miles Morales is 13, has two supportive parents, a great best friend, and his biggest worry is getting into a charter school. Things get complicated from there pretty quickly.

I was hooked on it right away – so much so, that I went back to read everything that had led up to Miles’ arrival (over a decade’s worth of consistently strong stories all written by one person!). I now had a better understanding and appreciation of how Peter Parker was realized in this alternate continuity, the impact of his heroic death, and the mixed feelings about seeing an out-of-his-depth stranger stumble his way into the role of Spider-Man’s successor. Given time, Miles as the underdog eventually carried the torch for those that enjoy the classic Peter Parker dynamic, giving readers a new lead character who’s learning how to be a superhero while managing his own responsibilities and family drama. I also appreciated that in this story, Miles’ ethnicity is incidental and has absolutely nothing to do with the plot. Other than his super powers, he’s still a regular kid. The real focus very much remains on the core universal message of “Great Power, Great Responsibility.” The new guy is absolutely worthy of the mantle, and our plan is to have some fun looking at his ongoing adventures – not just as Spider-Man, but also as Miles Morales.